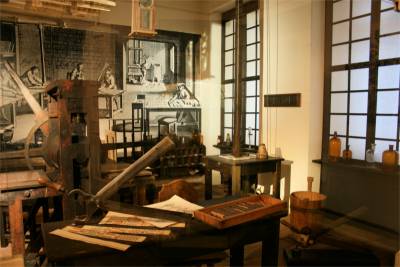 The game „Skat“ is very known and popular today. It is next to the games Poker and Bridge the most prevalent amusement game all over the world. There are common various legends about the inventor of the game “Skat”. However it is evidenced that „Skat“ was developed by Altenburgian citizens in a collective work. In 1813 the name „Skat“ emerged in a play jotter at first. It is a modification from the Italian  „scatare“ and this means to lay aside or to lay down. When „Skat“ came into being fore card games were the inspiration for it. They were the “Tarock”, the “L’Hombre”, the “Solo-Spiel” and the game “Schafskopf”.  Several elements were took for the new card game.  These named games underlie fortune and coincidence and sparse the own deftness.  But the new creation “Skat” also needs mathematical strategic mental activity. It speedy won popularity in 19th century. The triumphal procession went across Leipzig, Halle, Jena and Heidelberg into the world carried by students and salesmen. The over hundred years old skat-federation and the skat-tribunal that was founded in 1920, today an international skat-tribunal, have got there traditionally place, after a varied history, in Altenburg again.

The permanent exhibition at playing cards and „Skat“ looks on two sorts in ten rooms. There is the homelike aspect with making playing cards over 500 years in Altenburg. There is also the aspect that represents playing card from all over the world. The small pages are located in all continents, they are an element of global culture- and games-history. It is happen that playing cards obtain the status of a small-graphical work of art. Playing cards activate artists and worm an idea out of them. Of course, also the history of playing cards is proverbial „delaminated“.

In the exhibition is simulated a historical factory of produce playing cards. Similar as laundries printed playing cards hang across the room for drying.  They aren’t cut, yet. It seems that the master craftsman only is in a break. Even if this factory is in a museum silence so there is a producing card maker factory where visitors can do it by himself with instructions.

to the museum All Audioguides
© All rights of this audioguide are reserved by Residenzschloss, Schloss- und Spielkartenmuseum Altenburg