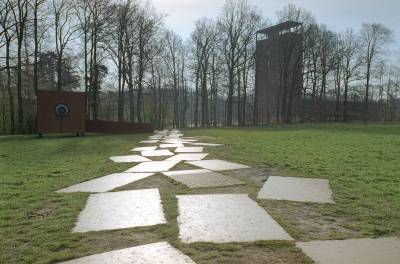 Since 1990, the majority of indicators for a battle between Romans and Germanic people were discovered on the so-called Oberersch, where the museum’s park opened in 2000. It covers a range of about 20 ha. Architecture and landscape design were developed by Mike Guyer and Annette Gigon in cooperation with agency Zulauf Seippel Schweingruber (all located in Switzerland).

The approach that has been realized here should prove ground-breaking for many later projects, both nationally and internationally. Neither the historic locale nor the event was architecturally reconstructed, instead a unique space for reflection was created in the middle of the landscape near the the Kalkriese Hill.

As a result, the park provides visitors with an exciting backdrop against which their own thoughts about the Varus battle can unfold, while the park invites them to explore groves and shrubs. The audio guide surprises visitors with unusual dialogues: 2,000 years after the battle, Varus and Arminius meet to revisit the battle site, but this time a historian makes sure the two adversaries don’t get involved in another fight.

Children can explore the location on their own by participating in a mystery game called »The Trace Seeker,« but the park offers much more: little creeks, small bridges, the climbing parcours or the theme walk »Undercover,« where Mister Reagan Wurmsky is your guide to the »underworld.«

Every year, numerous events other take place in the park as well: The most popular ones are the Easter Festival of Lights, the Roman and Germanic Days and the Forum Kalkriese. Moreover, variety is provided by nature throughout spring, summer, fall and winter.