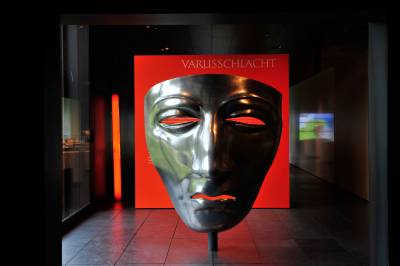 In 2009, the Varus Battle exhibition was redesigned based on a new concept in collaboration with architects hollenbeck.plato. It focuses on the scientific results based on 30 years of multidisciplinary research, and for this reason the new permanent exhibition is no longer about archaeological searches and discoveries, but about evaluations and explanations. Of course the antique protagonists – Romans and Germanic people – and their different ways of life as well as their world views are also brought to the visitors’ attention.

Thanks to modern technology, for the first time in history Varus and Arminius are given the opportunity to discuss their differences openly more than 2,000 years after the battle. Do they actually have something to say to each other? Actors Thomas Thieme and Max Engelke have lent them their heads and voices, presenting three possible courses of discussion.

Modern technology also played a pivotal role in archaeological research. Placed at six stations of the exhibition, the scientists involved put all their evidence on the table – lots of food for thought, for discoveries and discussions! The last exhibition topic leads us to the tower, where the reception history of the Varus Battle is presented on each floor. Once visitors have arrived at the top of the tower, they are rewarded with a panoramic view of the landscape, the site of the antique battle.

The permanent exhibition especially addresses children and youths. Models, illustrations, drawers to be explored, surprising effects and new media features aim at waking their interest in history and science. For those who wish to learn further details, collections of material offer a plethora of in-depth information. Audio texts invite visitors to approach the Varus Battle by listening to antique literary sources.

The round tour of the exhibition can be supplemented with an audio-guided tour, which is available for adults and children in German and English language.