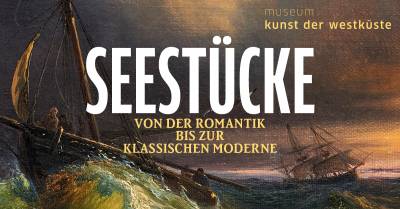 The infinite expanse and depth of the sea impresses and inspires people. For centuries, artists in particular have felt challenged to capture their experiences and observations and explore a subject that, by nature, is always in motion.

The perception of the sea is subject to constant change. The Norwegian painter Johan Christian Dahl, for example, hewed close to reality and in his realistic view of the hazards of the sea influenced many Norwegian and German painters. With the growing popularity of shores and beaches as places of recreation and inspiration, remote regions moved into focus, including the tip of Northern Jutland with its seemingly endless sandy beach where the North and Baltic Seas meet. There, the painters of the Skagen artists’ colony arrived at a very distinct visual vocabulary as a result of their engagement with the latest realistic and impressionistic tendencies unfolding in France. The artists associated with classical modernism, in turn, often used the subject of the sea to conjure a place to which the viewer yearns to return again and again. In Expressionism, the artists then broke away from nature and arrived at a highly subjective visual language in which the sea came to be a metaphor of their inner states of mind. For Max Beckmann, for instance, it became the symbol of eternity.

Seascapes. From the Romantic Period to Classical Modernismprovides an overview of the evolution of the seascape as a genre. Andreas Achenbach, Peder Severin Krøyer, Edvard Munch and Hendrik Willem Mesdag are among the 28 artists included.